Home Blog Do You Have a Claim for Language Discrimination Under FEHA?

Do You Have a Claim for Language Discrimination Under FEHA? 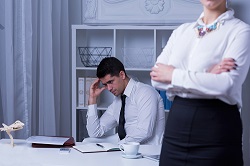 With California’s diverse immigrant population, language discrimination can be a barrier to employees obtaining and retaining jobs they are qualified for. This can cause a huge financial toll on their families when they lose job opportunities and wages.

Those who encounter discrimination can also suffer emotional distress and embarrassment if they are cruelly teased about their inability to speak English,  or about speaking it with an accent. The humiliation is piled on when they know that they are not getting the good jobs they deserve. Fortunately, language discrimination is illegal under federal and California laws.

What Is Language Discrimination?

It is illegal under both Titles VI and VII of the Civil Rights Act of 1964 and under California’s Fair Employment and Housing Act (FEHA) to discriminate against a person based on his national origin. The FEHA gives employees more protection than federal law because it applies to employers with fewer employees—five or more, versus fifteen—and does not cap noneconomic damages like those for emotional distress and punitive damages.

People can be discriminated against at work based on their language for many reasons. Some ways they can be mistreated include:

When Can an Employer Require You to Speak Only English?

California’s FEHA is stricter than federal civil rights laws in prohibiting employers from requiring workers to speak English only. Employers must meet these requirements:

Can an Employee Ever Be Treated Differently Due to His Accent?

Treating employees differently due to their accents is also illegal. It would only be permitted if the employer could show that the employee’s accent materially interferes with job performance. This means that it must have a significant impact on his ability to do his job. In addition, the employer must fairly and objectively access the person’s accent.

An employer also cannot deny an employee a job opportunity based on his lack of English fluency or proficiency, unless the job actually requires English-speaking skills and the person does not possess the level of language skill required for the job.